Crowning the Queen of May

Every mid-to-late May at my Catholic school we would host a mass run by the students called the May Crowning, where Mary, Queen of Heaven was crowned with flowers donated by parishioners and carried up to the altar by us. Given that my birthday was also in May (my favorite month) and Mary was already an important figure in my life it was one of the only masses that I actually cared about and paid attention to (the other was Midnight Mass on Christmas Eve). I was eager to be one of the students specially selected to carry the flower offerings to her statue and hold the candles to her honor. Some years I was lucky enough to do just that, other years I would look on in mild envy as I tried to praise her in song instead. Normally, due to my hearing impairment affecting my speech, I was discouraged from speaking at mass or singing, but during that mass I didn’t care if anyone heard me. I worked hard to memorize the songs for the mass and damn it I’m was gonna sing. I can still recite “Bring Flowers of the Rarest” by heart.

The Marian cult remains a constant, albeit a background, holdover from my Catholic childhood, a reminder of the few good things from the Church that I experienced. God was this abstract, formless being that was referred to, and used, as a hyper-masculine entity, but Mary was real. She had a form, she was once human like us, had to be strong in the face of her son’s torture and death, and then she became the eternal Queen of all of freaking HEAVEN. You don’t hear about Jesus being the King of Heaven nearly as much; King of Jews maybe, but not King of Heaven. In addition, she’s been named in various incarnations as the Queen of several countries, the supreme spiritual being of the entire nation for all its inhabitants, with no Kingly counterpart. Yet, for all her power she was still accessible and could relate to humans, constantly appearing to us and giving us tools to connect to her. She was real, God wasn’t.

Our full hearts are swelling,
Our Glad voices telling
The praise of the loveliest
Rose of the vale.

At least, that’s how it felt for me. Many people use her as an example of being a meek, quietly devoted mother and wife, something all women should aspire to be, and I don’t blame people for being uncomfortable with Mary as a result. The Church is inherently anti-feminist, so naturally their depiction of Mary follows suit. But for all the attempts by the Church to keep her in a generic box and control her image she just couldn’t be contained. Her cult developed in hundreds of different manifestations, absorbing remnants of pagan cults and deities, and she become the most popular saint in the world. The Church tries to regulate them all but like anything else they’re never fully successful. The May Crowning event is one such manifestation, born out of (presumably) Italian folk customs some 2-3 centuries ago that had since been recognized and spread to some Catholic regions, including some parishes in North America. It used to refer to the Crowning of Mary feast day, which occurred on May 31, but in 1954 that was changed to August 22 and the May Crowning tradition became a separate semi-official event. Nowadays the May Crowning can occur anytime during May, and the entire month is dedicated to her as well.

Queen Mary, in her incarnation as Nagy Boldogasszony-Queen of Hungary, retains a place in my ancestor shrine. She is a homage to my immediate ancestors, who have been Austrian and Hungarian Catholics for at least 6 generations (most likely much longer than that), as well as my distant ones with her possible pagan origins as a “birth and fertility goddess“. In that same pagan context she’s also the one I honor during planting, harvests, and family-specific events. Since old Magyar traditions beyond 1000 years ago are scanty and speculative at best, and Christianity already existed as one of many regional influences on Magyar culture(s), it is difficult to tell where the Catholic beliefs begin and the pagan ones end. Recorded folk traditions are likely a combination of both and that’s the assumption I rest most of my customs on. My worldview is pagan, but my traditions are a syncretic blend of the folk Catholicism I was raised in (which is inherently syncretic already) and the pagan customs of my heritage. Keeping Queen Mary as a presence in my life just seems to fit. 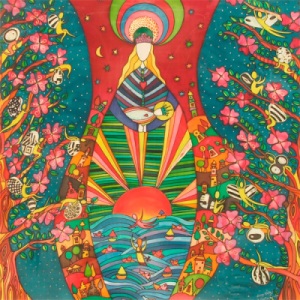 Coronation of the Virgin: Wikipedia

May devotions to the Blessed Virgin Mary: Wikipedia

The goddess of birth and fertility: Fred Hamori

“Flowers of the Rarest”: Wikipedia